The Pathfinder has been tamed since its days as a rugged truck-based SUV, but Nissan is looking to return some of its luster with the redesigned 2022 model. Although it has the same engine and platform as the previous model, the fifth-generation sport utility now features harder exterior lines, more capability, greater fuel economy, and updated features.

The midsize three-row Pathfinder sits above the compact Murano and below the full-size Armada in Nissan’s SUV lineup. If the 2022 Pathfinder is on your shortlist and you aren’t sure which one to get, keep reading for our trim review.

Every 2022 Pathfinder is outfitted with the same 284-hp 3.5-liter naturally aspirated V-6 that was in the previous generation, but Nissan has added an engine start-stop system to improve fuel economy. A nine-speed automatic transmission is standard, replacing the last model’s CVT, and so too is front-wheel drive. All-wheel drive is available.

The Pathfinder’s horsepower is greater than what the 2022 Honda Pilot’s V-6 can offer (280 hp) but trails the 295 hp produced by the 2021 Toyota Highlander’s V-6. In testing, the 2022 Pathfinder was one of the quickest in the segment, sprinting to 60 mph from a standstill in 7.0 seconds, 0.4 second better than the previous Pathfinder. It also stops in a commendably short 114 feet from 60 mph.

The cabin is basic but thoughtful. Storage under the center console in the first row is appreciated, as is the shelf above the glovebox, which is big enough for most smartphones. There are still analog gauges in the cluster at this grade, but standard features like a three-zone climate control system with second-row controls, keyless entry, four USB ports (two per first two rows), and dual 12-volt outlets are appreciated. An infotainment system with an 8.0-inch touchscreen, six speakers, and Apple CarPlay and Android Auto compatibility gets the job done. The Pathfinder S is equipped with eight passenger seating and a 60/40 split bench second row.

The 2022 Pathfinder S is the most affordable way to get into the Nissan SUV. Models with standard FWD sticker for $34,585, and with available AWD, the price grows to $36,485. The entry-level 2021 Toyota Highlander L is more expensive than the Pathfinder S, coming in at $36,300 for FWD and $37,900 for AWD. While it doesn’t get the blind-spot and rear cross-traffic monitoring that are standard on the Pathfinder at this grade, it does receive an eight-way power adjustable driver’s seat.

Through Nissan’s ProPilot Assist driver assist system, the Pathfinder SV adds lane keeping and adaptive cruise control. The SV also picks up heated side mirrors, a roof rack, and remote engine start. Black badges and grille are available to replace the chrome ones on the Pathfinder SV and SL only.

Heated front seats and an eight-way power adjustable driver’s seat are introduced on the Pathfinder SV, as is a leather-wrapped steering wheel. The SV cabin also adds an auto-dimming rearview mirror and illuminated vanity mirrors.

With the additional features, the price of the Pathfinder SV FWD increases to $37,375. Models with AWD ring up at $39,275. In comparison, the 2021 Highlander LE FWD retails for $38,500 and the AWD model for $40,100. At this trim level, the Toyota finally gets blind-spot and rear cross-traffic monitoring, but it also adds a power liftgate the Pathfinder doesn’t receive until the next level up.

Infotainment is improved with a larger 9.0-inch touchscreen, wireless Apple CarPlay, and navigation. Nissan adds another USB port to the Pathfinder SL for a total of five, and a 360-degree camera system replaces the rearview camera used on the lower two trims.

The 2022 Pathfinder SL FWD stickers for $40,765 and AWD for $42,665. The 2021 Highlander Limited retails for $45,255 for the FWD and $47,205 for the AWD. Standard premium features like the Toyota’s 20-inch wheels, ventilated as well as heated front seats, hands-free power liftgate, wireless charging, and sunroof explain some of the price disparity. The Highlander Limited still has a small 8.0-inch touchscreen at this grade, though.

The Pathfinder Platinum is the top trim level for the SUV and features a standard hands-free power liftgate, panoramic roof, rain sensing wipers, 20-inch machined aluminum wheels, and power folding side mirrors that tilt down when the vehicle is put in reverse. A transmission oil cooler is also standard on the Pathfinder Platinum, which helps increase towing capacity to 6,000 pounds. The feature is also available for the Pathfinder SV and SL. Because the Platinum AWD is the heaviest Pathfinder trim and has the biggest wheels, it has the lowest fuel economy in the lineup at 20/25 mpg city/highway (compared to 21/27 mpg for the most efficient Pathfinder).

The sacrifice in fuel economy comes with an array of plush features. The Pathfinder Platinum’s cabin boasts semi-aniline leather trimmed first and second row seats with quilting, cooled front seats, a power tilt and telescoping steering wheel, and two-driver memory. Heated second-row captain’s chairs are additionally standard on the Platinum grade but limit seating to seven instead of eight.

A head-up display, 12.3-inch digital gauge cluster, wireless smartphone charging, and 13-speaker Bose premium sound system are also standard on the Pathfinder Platinum. Another USB port is added for a total of six, and a 120-volt power outlet in the second row is included.

Toyota also calls its top 2021 Highlander trim Platinum and the FWD version stickers for $48,455 while the AWD stickers for $50,405. At this level, the Highlander has a smaller gauge cluster display, only 11 speakers, and just five USB ports, but it’s also equipped with a larger 12.3-inch touchscreen.

The two lowest trim levels, S and SV, are lean on niceties. We’re also not keen on the Pathfinder Platinum’s compromised fuel economy or its 20-inch wheels, which we suspect undermine ride quality. The makes the 2022 Pathfinder SL trim level the favorite for hitting all the right notes in comfort and convenience.

We think the 2022 Pathfinder SL has the right mix of features including its powered front seats, heated steering wheel, wireless Apple CarPlay, power liftgate, and 360-degree camera system. We also appreciate the premium touches at this grade, from the leather trimming to the bigger touchscreen. And at just over $40,000, the 2022 Pathfinder SL comes in thousands less than its most popular and well-equipped rivals. If you feel like you’re missing out on features like the panoramic roof or improved towing capacity, they can be added through the available $2,900 SL Premium package.

Sun Sep 26 , 2021
CarPlay is becoming an essential part of using iOS. What started as something only in high-end aftermarket stereos has turned into the default for new cars. Unfortunately, my car from 2017 doesn’t have it, and I am not interested in completely ripping the factory display out—as it’s a pretty unique […] 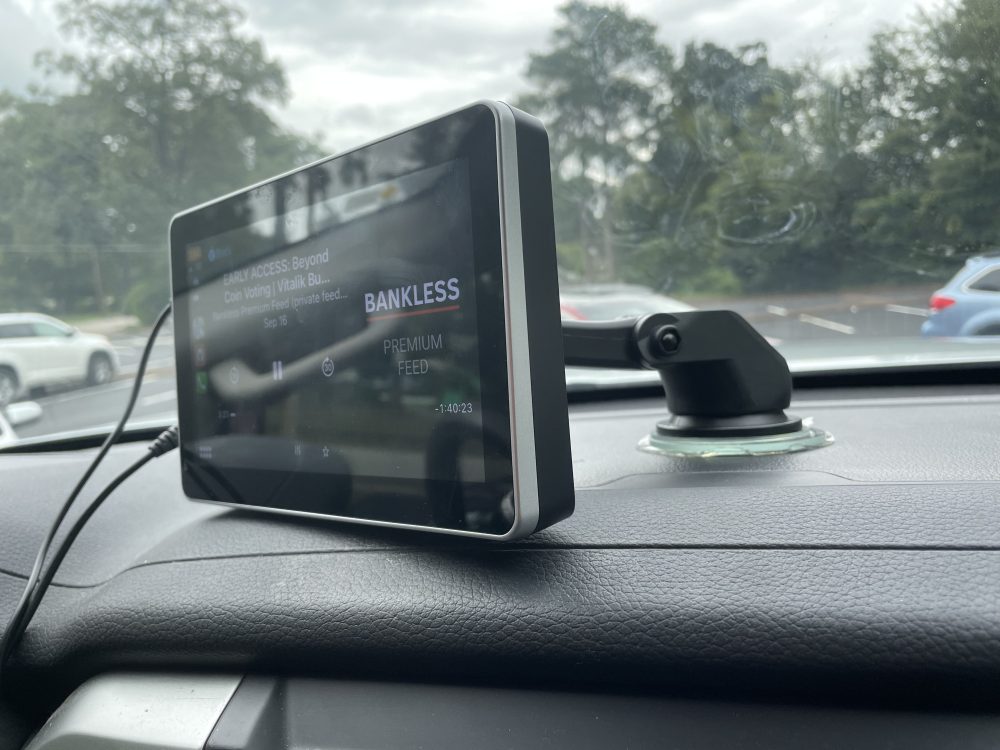