I’ve been a lemon law attorney in Michigan for over 30 years, which means I’ve spent about three decades telling people who bought bad used cars that there is almost nothing I can do to help them. The problem? Most state lemon laws don’t cover used cars, and the real kicker is that most used cars in America are sold “As Is.” Most people have no idea what that means. Partly, the lack of understanding comes from how complicated the Uniform Commercial Code is. It is also fueled by car sellers who never explain what the language means when someone asks about it in the sales documents.

The UCC governs the sale of goods in most states – it has been adopted in all states but some have tweaked it so that the code is not identical across the country. Used cars are considered “goods” and when you buy a used car from a dealer, the dealer is considered a “merchant” under the code. This matters because the code says the following: “Unless excluded or modified, a warranty that the goods shall be merchantable is implied in a contract for their sale if the seller is a merchant with respect to goods of that kind.” A subsection there says that for the goods to be merchantable, they “are fit for the ordinary purposes for which such goods are used.” Most people would agree that an automobile should be able to get from one point to another safely and reliably. Where does this fall apart for the typical used car buyer in America? The first two words: “Unless excluded.”

The warranty described above is one of “merchantability.” And the code explicitly allows for the seller to exclude it through the use of a disclaimer. “[T]o exclude or modify the implied warranty of merchantability or any part of it the language must mention merchantability and in case of a writing must be conspicuous.” The merchant may exclude the warranty of merchantability, and in case that was too complicated, the code says the merchant can do it in an easier fashion. “[U]nless the circumstances indicate otherwise, all implied warranties are excluded by expressions like “as is”, “with all faults” or other language which in common understanding calls the buyer’s attention to the exclusion of warranties and makes plain that there is no implied warranty.” In other words, a merchant can sell a vehicle “as is” and the law presumes the buyer knows what it means and agrees to buy the car with all faults.

Interestingly, all used car dealers in the US are required to notify the buyers of the “as is” nature of the sale through the use of the Buyer’s Guide, a form created by the Federal Trade Commission. By law, any used car dealer in the US is required to have a Buyer’s Guide on display with the car when it is offered for sale and it clearly indicates that the car is either being sold “As-Is No Dealer Warranty” or with a “Warranty.” I have spoken to countless car buyers who told me they did not know if they bought their car As Is or not – but had a copy of the Buyer’s Guide among the papers they signed when purchasing their car. Their excuse? They didn’t read it. Or, they saw it but didn’t understand what it meant.

What does “as is” or “with all faults” mean, from a practical viewpoint? Once you sign the papers, that car is yours. It doesn’t have to run for any length of time after you buy it. Technically, it could fail to get off the seller’s lot and it would be your problem, not theirs. It can be unsafe. It can have problems that would cost thousands of dollars to fix. It could burst into flames as you walk toward it the first time after signing papers. Those are some of the potential faults you just agreed to buy.

It is worth noting that there are a few states that have modified this and do not allow outright As Is sales by licensed car dealers. In those states, the Buyer’s Guide (with the FTC’s approval) lists “Implied Warranties Only” instead of As Is. Also, some states which require a vehicle to pass an annual inspection might place liability on the seller to make sure the vehicle can overcome that hurdle upon transfer to the buyer. If so, count yourself lucky. Michigan has no such inspections and no such requirements (Michigan being the state where I practice law).

And finally, you may have noticed that the language of the UCC was premised on a sale by a “merchant.” If you buy a car off some guy down the street, or an individual on the internet who is not a dealer, those sales are presumed to be As Is. There is no requirement for the seller to disclaim the warranty of merchantability since the seller is not a merchant. You buy from an individual As Is.

The answer? Understand what “As Is” means and shop accordingly. Price the vehicle with a consideration of what might go wrong. And have the vehicle inspected! Disregard the pretty words the salesperson says as they walk around the car with you. In the end, the used car is most likely being sold As Is, which means that the car will be yours – with all faults – the moment you buy it.

Steve Lehto is a writer and attorney from Michigan. He specializes in Lemon Law and frequently writes about cars and the law. His most recent books include Preston Tucker and His Battle to Build the Car of Tomorrow and Dodge Daytona and Plymouth Superbird: Design, Development, Production and Competition. He also has a YouTube channel where he talks about these things.

This content is created and maintained by a third party, and imported onto this page to help users provide their email addresses. You may be able to find more information about this and similar content at piano.io

Designer 3D-prints spare parts for the sea | The Advocate

Tue Jan 4 , 2022
news, national On a sleek, low plinth in the National Gallery of Victoria, Alex Goad’s artificial reef structure looks perfectly at home beside other modernist installations. The archway of interconnected modules, made with the help of 3D-printers, is part of an exhibit featuring creative professionals who fuse design, technology, and […] 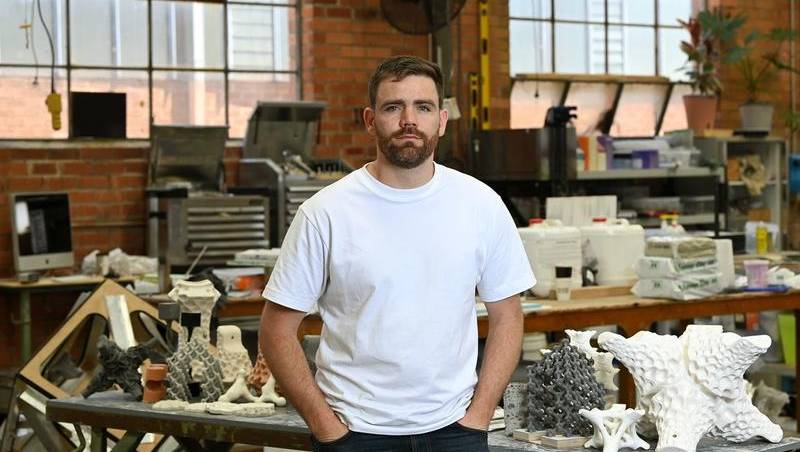