Scher’s shirt says: “Kidney Donor: Because who wouldn’t want a piece of this?”

His shirt says: “Kidney recipient. I run on spare parts.”

Quackenbush, of Palo Alto, received one of Scher’s kidneys on Oct. 26 as part of a successful transplant surgery at Sutter Health’s California Pacific Medical Center in San Francisco. It was 40 years ago that they met in Palo Alto’s Juana Briones Elementary School, and over time they had lost touch. But when Quackenbush needed a kidney transplant, Scher, who now lives in Concord, did not hesitate to be his live donor.

Donating a kidney isn’t as casual as sharing a sandwich with one’s best friend in first grade, but kidney donation wouldn’t harm her own health, Scher learned.

Quackenbush has Dandy-Walker syndrome, a congenital brain malformation of the cerebellum, and he is blind. She couldn’t bear the thought of her old friend, who already lives with a disability, being in failing health.

The two met in first grade at Juana Briones, where children with a disability often spent most of the day in general education classrooms alongside classmates without disabilities.

Scher, now a school-based occupational therapist who works with special education students, said the integrated classrooms at Juana Briones in the early 1980s built a comfort level and understanding of classmates with disabilities and a sense of inclusiveness she doesn’t think exists in schools today.

“We were buddies. Our moms were really good friends,” she said.

But as they progressed through middle and high school, she and Quackenbush lost contact. He was in a class for students with visual impairment; Scher was involved in sports and hanging out with her friends.

Now 45 years old, Quackenbush and Scher meet only when their families get together during holidays. They last saw each other on Thanksgiving 2019, prior to the COVID-19 outbreak.

His mother, Marge, wrote an email letter to neighbors, relatives, old friends and their children and people with whom she’d worked asking if they might consider donating a kidney. She read that many people are willing to donate if they are only asked, she said.

“It has been difficult to write this letter, but I’m sure you would do the same for your child,” she wrote.

Marge said she wasn’t sure how such a request would be received. Some people didn’t respond; others offered sympathy. One neighbor, David Oshima, immediately wrote an affirming response supporting her initiative.

“You don’t know how much that means to me,” she said.

But no one had a kidney to offer. Still, Marge didn’t lose hope.

“I am a very determined person, and I’m determined to take action. I didn’t think so much about failure as about what I was going to do. You’ve got to have a plan of action in order to carry it through,” she said.

“You have to find that needle in the haystack — and Suzie was that needle.”

Scher said she had always thought about being a donor. She stipulated so on her driver’s license in the event that she died. In 2020, she signed up to be a bone marrow donor, but she hasn’t been called, she said.

Then she learned about Marge’s search for a kidney donor.

“This hit me differently. I thought, ‘Here’s my chance.'”

Getting a kidney from a deceased donor can take five to seven years. In the meanwhile, living on dialysis can take its toll. The strain on the body can increase the chances of complications such as stroke after the transplant, said Dr. Steven Katznelson, nephrologist and medical director of kidney transplants at Sutter’s California Pacific Medical Center.

The shorter the period of time one is on dialysis, the better the chances are that the donated kidney won’t be rejected, Katznelson said.

Kidney failure can sneak up without its victims being aware. Often, patients complain of tiredness, and the problem is found during routine testing, Katznelson said. In some cases, there’s no clear cause.

Marge said she didn’t know for many years that her only child had kidney issues.

“Todd and I both just about fainted,” she said, after learning from a nephrologist of her son’s condition.

Quackenbush lived 14 years until his kidneys failed to the point of needing dialysis, Marge said. His quality of life was deteriorating. He was on a restricted diet and had to do continuous blood pressure and other measurements. And he was chronically tired. Dialysis procedures took four hours per session, three times a week, and he couldn’t travel more than an hour’s distance from the dialysis center.

Scher started Googling about kidney transplants in February 2021. Her husband was supportive. She had her blood typed for a match with Quackenbush and underwent chest X-rays, an electrocardiogram, urine and blood tests.

“There was no pressure,” she said of the California Pacific medical team. “They said, ‘We want to make sure this is your choice.'”

Scher never had any pushback from her family about her decision, she said.

“This was something I was pulled to do,” she recalled. “If I can give him better health because I’m healthy, that’s what I want to do. He’s a sweet, calm, highly intelligent, thoughtful guy.”

In August, she learned she was a suitable match and they had a date for the roughly 3 1/2-hour surgery. Scher asked the transplant coordinator if she could be the one to tell Quackenbush. She called him while he was having dinner at his parents’ home.

“They were so shocked it was going to happen. They had had a false alarm from another donor that fell through,” she said.

“It was almost disbelief,” Marge said, when the family learned Scher would be the donor.

The two friends reunited in pre-op just two days before the surgery. Scher’s husband stayed home to take care of their two children, ages 4 1/2 and 6 1/2. Scher and her mother, Trina Lovercheck, stayed at the Courtyard Marriott across the street from the hospital.

On the morning of the surgery, Quackenbush and Scher walked together with their parents to the hospital.

“It was a great feeling,” he said.

It took a few hours for Quackenbush to have one last dialysis treatment before the transplant. The surgeon then came in and signed the left side of Scher’s abdomen, the side where they would remove the kidney.

Scher remembered that a friend who received a procedure at the hospital had listened to music while in the operating room. She asked to listen to Pink’s “Cover Me In Sunshine” as she waited on the surgical table.

“I don’t even remember the first notes of the song,” she said, as the anesthetic took hold.

When she awoke, she was in the hospital room, one kidney lighter. The next day she visited Quackenbush in his room, and he already looked better.

Within hours of the transplant, Quackenbush’s new kidney, “Suzette,” so named because it’s a small piece of Scher, began functioning.

“It was like a new lease on life,” Scher recalled, seeing her old friend regaining strength and vitality.

Six weeks later, Scher has minimal pain and is regaining strength. She can drive again and works remotely.

“Everyone in the hospital was very nice and caring. They even went out of their way to put a sign on the door of the room that they needed to introduce themselves because I’m totally blind. Every time there was a shift change, the previous shift nurse came in with a new nurse to introduce themselves. There were no surprises,” he said.

Quackenbush now has three kidneys to Scher’s one, since doctors didn’t remove the failing ones. He said he has much more energy now. His skin tone has returned to a healthy hue and he’s no longer in pain.

He is back to taking long walks and working remotely at his job as the assistant donation coordinator for the Ecumenical Hunger Program. He’s likely to return to work after the New Year, he said.

Tue Dec 21 , 2021
According to RAC Fuel Watch, a litre of petrol will currently set drivers back 145.99p, with diesel costing 149.20p per litre. While both fuels are expected to continually fall in price, costs are much higher than they were at the end of 2020. Filling up the average 55-litre family car […] 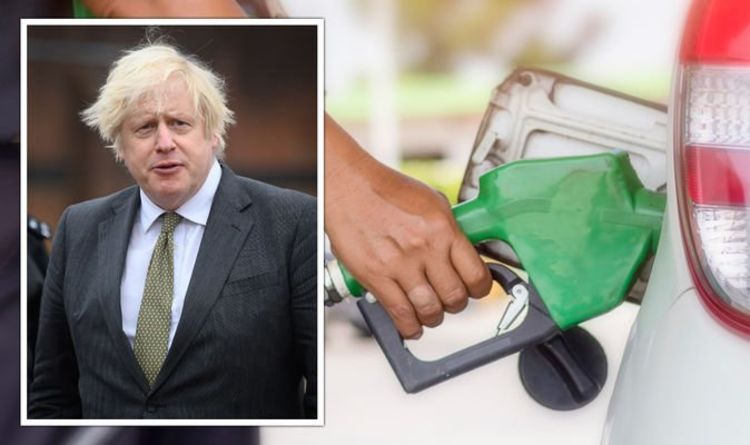