You don’t need to know the new 2022 Subaru BRZ’s 0-60-mph time, and there’s no reason to worry about the car’s skidpad grip. We tested both the manual and automatic transmission versions, but you shouldn’t care about those results, either. Contextualizing it by numbers misses the point. Rather, you should judge the BRZ by how it feels—how it connects you to every detail in the asphalt, in every corner, on any road.

It’s awesome. The BRZ makes you want to take an extra trip to the store because you realize you want a banana. It’s the type of car where, days after a drive, you suddenly find yourself reminiscing about every little moment where the Subaru showed you something new about itself and your abilities. Eventually, it hits you that whatever rate you drive at simply changes the amount of time to enjoy the machine surrounding you—fast or slow doesn’t matter. Putting any of that into numbers only diminishes the fantastic feel that makes the BRZ special.

Still want to know how quick it is, or how it did on our handling course? Fine. If you insist.

As before, the 2022 Subaru BRZ is powered by a flat-four engine, which now displaces 2.4 liters. Output measures 228 hp and 184 lb-ft of torque, once again sent to the ideal wheels via a six-speed manual or automatic. Unlike with the previous BRZ, power and torque are the same regardless of transmission. It’s all distributed between the back tires by a limited-slip differential.

Gone is the maligned midrange torque dip that plagued the first BRZ’s 2.0-liter. Peak torque now hits at 3,700 rpm, just about where it used to crater, from which point the tachometer swings readily to the 7,500-rpm redline. Feeling the linear build of power makes turbocharged or electrified powertrains seem soulless. Unfortunately, this engine doesn’t sound great, only getting louder, not better, the higher it revs. That gritty, primitive note is heard more through its buzzy intake than its muted exhaust.

The six-speed setup is sublime. It’s not only the firm, slick shift action that’s great, but also the clutch’s intuitive uptake and the pedals’ spot-on spacing for heel-toe downshifts.

At the test track, though, we found it tricky to launch the manual BRZ consistently. We selected Track mode, brought the revs near 4,500 rpm, dropped the clutch, let the tail wiggle a bit, then applied full throttle to make the car happily race forward. The gauge-cluster shift indicator tends to suggest an early upshift but shifting at 7,000 rpm gave the best time of 5.9 seconds. The result made this the first Subaru BRZ we’ve tested to crack the 6-second barrier. The outgoing manual model, like our former 2016 Series Hyperblue long-term review car, hit 60 mph in between 6.3 and 6.8 seconds.

Similarly, the manual 2022 BRZ’s 14.3-second, 99.8-mph quarter-mile time makes it the most drag-race-ready version in our test logs, beating out prior BRZs by approximately 1 second and 5.0 mph.

Braking performance in the 2022 Subaru BRZ is at least as impressive as its acceleration. It stopped from 60 mph in 107 feet, an improvement of between 7 and 13 feet—nearly a car length—over the previous car. We lauded the excellent brake pedal, which provides consistent stopping performance and didn’t become mushy after several runs. Indeed, the brakes take a firm press to bite, but they have confidence-inspiring power. However, we also noted how the rear end could come unsettled under hard braking from high speed.

Our skidpad and figure-eight tests proved the 2022 Subaru BRZ isn’t a “numbers car.” No doubt it’s a sticky little thing, holding on to 0.93 g (average) around the skidpad. On the figure eight, which combines acceleration, braking, and cornering, it posted a 25.7-second, 0.71 g (average) lap. Neither result is an improvement over the original. But we loved how the car felt as we whipped it; we praised it for being not edgy or dicey, just playful, all held in control by delightful and precise steering. If you’re willing to mangle those Michelins, you’ll find you can steer it with the throttle, having as much or as little yaw as you do or don’t want. What was once fun a fun car is now even more fun.

You want the manual gearbox. Still, the 2022 Subaru BRZ is fun with the automatic, which commands an additional $1,800. It’s better in Sport mode, which lets the engine rev closer to its torque peak instead of shifting early in regular Drive. Best is manual mode, which engages the tactile, cooperative paddle shifters. Regardless, gear changes are a bit slushy; this is hardly a crisp dual-clutch transmission.

The automatic 2022 BRZ zipped to 60 mph in 6.6 seconds, 1.1 second quicker than the equivalent first-gen car. It crossed the quarter mile in 14.9 seconds at 97.0 mph, a solid improvement over its predecessor’s 15.9-second, 91.5-mph result. We appreciated how the sticky Michelins minimized launch wheelspin, and we achieved the best result by pressing both pedals, which holds the engine at about 2,200 rpm. Releasing the brake and departing the line, we detected the car’s 7,000-rpm horsepower peak, noting that it takes a moment for the engine to wake up. Stopping from 60 mph took 111 feet, again shorter than any previous BRZ we tested.

Skidpad and figure-eight results in the automatic BRZ were comparable to those in the manual car. In the former it gripped to 0.94 g average, and in the latter, it lapped in 25.7 seconds at 0.71 g average. It’s just as lovely as the manual version—all the same balance, delight, and fingertip steering. It remains a tail-happy machine, too; we noticed the rear tires got hot before the fronts, an unusual trait.

Test results don’t illustrate how living with the 2022 Subaru BRZ remains challenging. Some aspects are good, like the supportive front seats or thin-rimmed steering wheel. Yet swaths of hard black plastic, flimsy circular air vents, and somewhat low-resolution displays make the cabin look and feel cheap. The level of noise inside the cabin at highway speeds furthers the spartan impression.

Despite the superb driving position, some ergonomic and packaging decisions left us confused. There are few places to stash things outside of the center console compartment. The drive mode, traction control, and heated-seat switches are placed prominently behind the shifter. We think those could have gone elsewhere to allow for more storage.

Behind the front seats are two areas that, according to Subaru, are meant to accommodate humans. They’re better thought of as supplements to the small trunk. Only automatic-equipped BRZ models get EyeSight driver assist features, which works nowhere near as well as in other Subarus. The adaptive cruise control shuts off in stop-and-go traffic, and the lane-keeping system seems to do nothing.

This isn’t a do-it-all sports car that’s as good a commuter as it is a canyon carver. Still, we are mighty impressed with it, and it’s made big fans out of us.

Now that you know the results of the 2022 Subaru BRZ’s performance testing, you’d do well to forget them. Inevitably someone will decry the car as slow, and depending on context, they won’t be wrong. And even if it grips impressively on the skidpad, zeroing in on those decimals detracts from the sensations it imparts while it does so. Sure, the new 2022 BRZ’s numbers are generally better than before, but the improvement in feel is greater than gains made in any test.

Instead, focus on how this car earns your affection and makes memories. From the first drive onward, you’ll find yourself contemplating how fluid the weight transfer was while braking before a turn, how planted it felt over a tricky off-camber bit, or how the tail stepped out so predictably when chucking the car into a bend. It’s simply delightful, as the new BRZ transcends the confines of numbers like few other vehicles.

Fri Dec 10 , 2021
The art car has a history of creating an avenue for car owners to express their individuality in the increasingly uniform nature of the automotive world. What began as a hippie movement in the late 1960s has transformed into auto brand sponsored art. The content and meaning of these vehicles […] 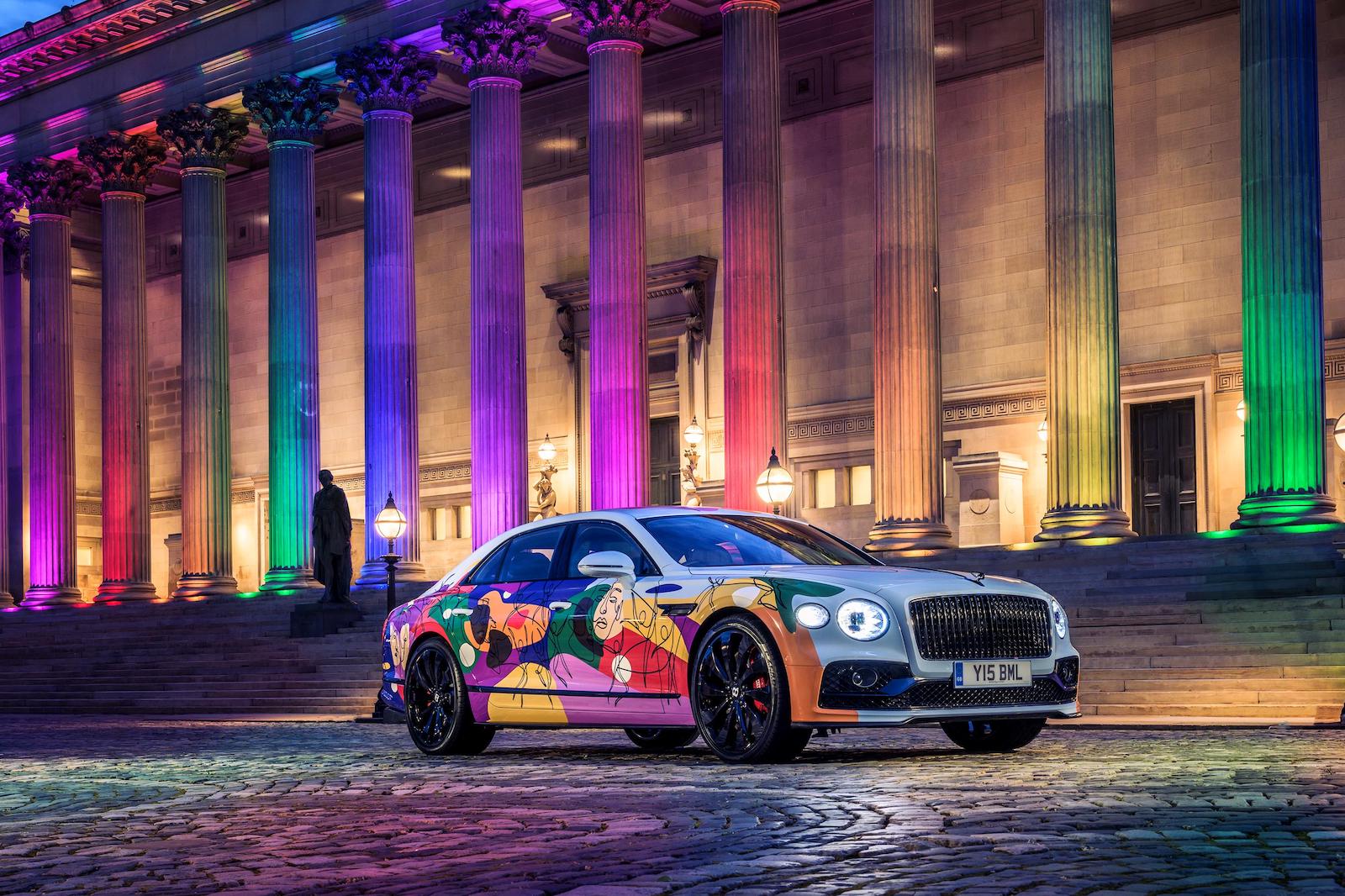