John Pierce and his son were headed to Cooperstown, N.Y. for the baseball induction ceremony on Sept. 8, an event they have gone to every year since 1994.

A deer derailed their plans. Father and son were unhurt, but Pierce’s 2010 Mercedes was totaled.

For the next 10 days, he labored online to find a new car. Because of supply chain issues, many of the cars he saw were sold before he made it to the dealership, he said.

“I mostly limited my search to dealerships because of concerns about buying a flood car from Hurricane Ida. I thought a dealership would be more trustworthy,” Pierce said. “Prices were sky-high and inventory was super-limited. I grabbed this car as soon as I saw it.”

It was a 2012 BMW 550i xDrive at Baker Chrysler Jeep Dodge Ram in Princeton.

Pierce took the 75-minute ride from his home in Haverton, Pennsylvania and paid $16,995 for the car, which came with a 30-day limited warranty covering the engine, transmission and all-wheel drive.

The car wasn’t perfect, Pierce said. The rear power sunshade wouldn’t retract — something not covered under the warranty and discovered after the contract was signed, but the sales manager gave him a verbal promise to fix it, Pierce said.

It turns out that was just one of the car’s problems.

“In all, the car was in a repair center and out of service for 22 of the first 27 days of full ownership,” Pierce said.

Pierce said on his third day of ownership, the oil warning light came on. He took the car to his local mechanic, who diagnosed a major oil leak. The mechanic also found a torn axle boot, which can cause grease to leak out while dirt and moisture get in, Pierce said.

Pierce took the car back to Baker Jeep.

He said he later learned the repairs on the torn axle boot and the power rear shade didn’t do the trick and the issues remained.

The car went back to Baker.

“Upon arrival, the oil display was at the minimum level,” Pierce said. “It is painfully clear that no work was done on the car.” Either that, or the oil vanished during the 55-mile drive.

He took the car to a local BMW dealership, which financially, turned out to be his only lucky break.

The oil issue was fixed for free because it was related to a class-action lawsuit over excessive engine oil consumption. Otherwise, it would have cost, with tax, $9,600 to repair.

The car still needed other repairs, including some that were necessary to pass inspection in Pennsylvania. In all, it cost him $5,150: $3,128 for safety repairs to the bushings, rear driveshaft flex joint disc, right front outer axle boot, a radiator leak and more, he said. He also had to replace the tires, which along with an alignment and a cracked wheel, cost $1,916. And he paid $105 for his mechanic’s initial diagnosis.

Pierce filed complaints with the Division of Consumer Affairs and the Better Business Bureau (BBB). Baker Jeep replied to the BBB inquiry, disputing that it had any responsibility for the problems. BBB, which has no legal authority, accepted the response and closed the case on Nov. 5.

Pierce said he believes the repairs should have been covered under the limited warranty, and he thinks Baker should reimburse him for the costs.

“I specifically selected a dealership to purchase a car because of concerns about possibly purchasing a flood-damaged car,” he said. “I wasn’t flooded, but I sure have been burned.”

We reviewed Pierce’s repair receipts, contract and warranty, and we reached out to Baker about his experience.

“There is no way as a Jeep dealership for us to test for (the oil) failure or to be aware of the lawsuit and the outcome of that lawsuit on this particular issue,” the letter said, noting the car was sold as a used car and not as a certified pre-owned car.

About the rear power shade, Baker said there was nothing in writing to support Pierce’s claim of any promise to fix it.

“In this case we have no legal obligation to do anything. Any other expenses incurred by the customer were by his own decision,” the response said. “The dealer has no magic to make an old car like brand new.”

Pierce took issue with Baker’s position, saying that the oil issue, torn boot axle and other problems were not cosmetic but affect the safety and performance of the car and would be covered under the limited warranty. As-is, the car didn’t pass inspection.

Pierce will have to wait to see if Consumer Affairs makes a different determination than BBB.

And here is where we get to “buyer beware.”

We asked Baker Jeep’s Brooks about the differences between a used car and a certified pre-owned car.

He said the certified models are typically less than five years old with relatively low mileage, and they go through a more extensive inspection process, which adds to the cost.

“A used car gets a visual inspection for road worthiness, fluids are changed or topped off depending upon what’s found. It gets a quick road test, a wash and wax,” he said in an email. “Folks who buy those kinds of cars are price shoppers first and foremost.”

He said many customers choose to have an outside inspection done before a purchase — something Pierce did not do — and that the dealership doesn’t discourage that.

“The customer drove a long way to buy a low-priced, high-mileage luxury car from a Jeep dealer,” he said. “It’s like buying a lobster dinner at a diner.”

We get that it’s hard to find a used car that meets your budget and needs, especially as supply chain issues persist. When you do find one, make sure to understand if it’s considered used or certified pre-owned. Understand the warranty. Get everything in writing.

And take the time to have a trusted mechanic check it out. It could save you thousands of dollars and lots of aggravation.

Please subscribe now and support the local journalism YOU rely on and trust.

Karin Price Mueller may be reached at [email protected].

Sat Dec 11 , 2021
THE highly anticipated tech carnival is in town now. The HUAWEI Service Carnival will run from now until Dec 31, showcasing exciting rewards with a whole lot of exclusive promotions across selected service centres nationwide. Kick off the year-end celebration with amazing offers, including discounts on spare part replacement on […] 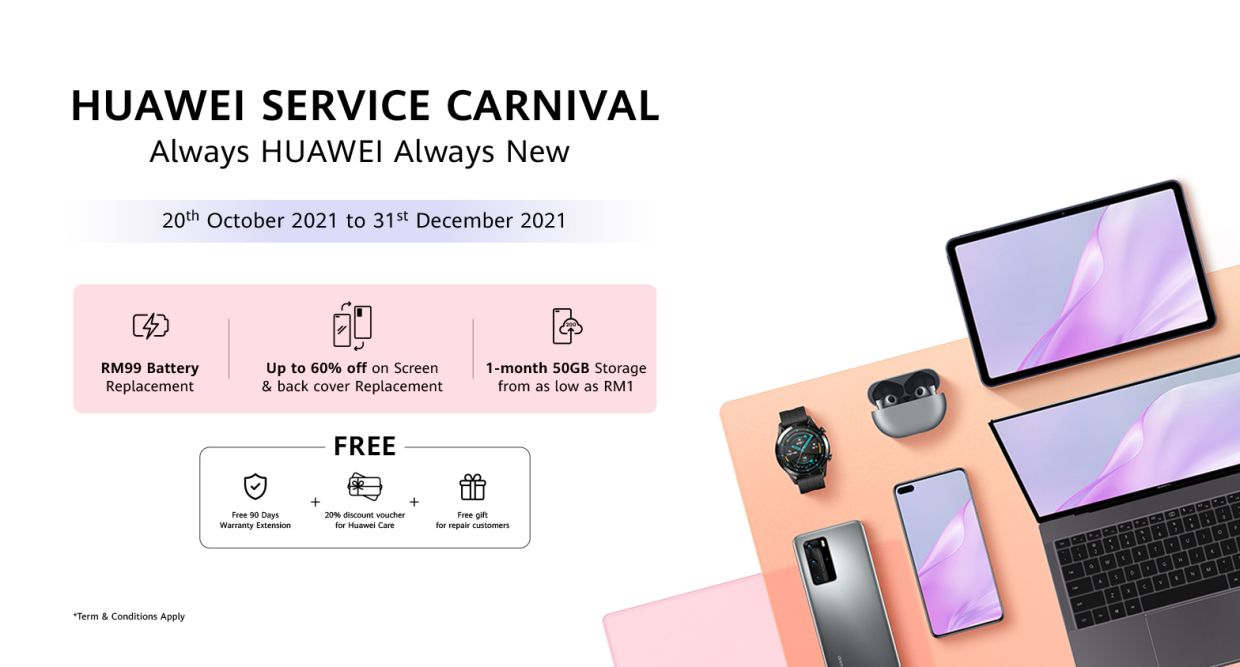