As we bade farewell to 2020, it seemed reasonable to assume that the sight of empty supermarket shelves – which shocked so many at the start of the pandemic – would be one thing less to worry about in 2021. Yet over the past 12 months the nation has experienced shortages of a vast array of goods.

That list includes everything from Walkers crisps and McDonald’s milkshakes to Nintendo Switch games consoles and Christmas toys to petrol and diesel. And that’s just for starters.

While the blame for the toilet paper shortages of 2020 can be placed on the shoulders of consumers seeking a pack or two extra to tide them over, the run on goods this year is the result of supply chain issues, both national and global. At the heart of it is the shortage of lorry drivers in the UK and the international shipping container crisis.

When i began reporting on the HGV driver shortage in June, the scale of the problem was still unclear to many – there were gaps appearing here and there on some supermarket shelves but most people could get what they needed.

But haulage firms, drivers and food suppliers were certain that things were about to take a turn for the worse without Government intervention.

At that time, the Road Haulage Association (RHA) estimated the shortfall to be around 65,000 drivers, but that figure increased to about 100,000 within weeks.

According to the RHA, it was Brexit – which prompted thousands of EU lorry drivers to leave the UK – and a lack of driver training and tests during the pandemic that had led to the “desperate shortage”.

Many drivers i spoke to agreed, but they also emphasised how other factors, including the introduction of IR35 tax changes in April, which led firms to reclassify agency drivers as employees, resulting in reduced pay, had prompted a large number of people to leave the industry.

And numerous drivers pointed to the poor working conditions they experienced, including a lack of toilets on the road, filthy service stations, and being targeted by thieves, along with poor pay, as reasons for the shortfall.

The dwindling number of drivers able to transport goods from ports, warehouses and suppliers to their intended destination has meant tonnes of fresh produce has gone to waste, with food spoiling before it gets to stores or supermarkets rejecting loads because of their reduced shelf life.

Tim O’Malley, the boss of one supplier, Nationwide Produce, said in the summer: “It’s an escalating crisis… deliveries are not going to supermarkets. Produce is prepared, packed, ready to go, and not being delivered.”

Elsewhere, Tesco suppliers claimed they were being forced to bin nearly 50 tonnes of fresh food – enough to fill two trucks – every week.

Compounding the problems caused by the UK driver shortage is the global shipping container crisis.

Supply chain systems around the world were thrown into chaos at the start of the pandemic as, with demand down, and Covid outbreaks shutting down production and port closures, many ships’ journeys were cancelled. Shipping containers, many of them in China, stayed put leading some ports to become congested with containers.

As countries including the UK have emerged from lockdowns, demand for goods has shot up, leading to intense competition for space on vessels. Ocean market freight rates rocketed to record highs – in the 12 months to August, costs leapt by more than $10,000 (£7,500) per 40ft container, up from around $2,000 (£1,450) in some instances. i spoke to retailers who were being quoted as much as £23,000 for a single shipping container.

These mushrooming costs have led retailers to raise prices, or in some cases to cancel orders, meaning more shortages in the UK.

Plan B for Christmas toys

With Christmas on the horizon, the toy industry warned that some of the products tipped to be the must-have items of the season would likely end up in short supply.

The British Toy and Hobby Association stressed that shoppers would not be confronted with empty toy stores but said that retailers could not rely on being able to ship in more of the most popular items once stock had run dry as they usually would. As one toy industry leader, Alan Simpson, managing director at the chain Toytown, put it, children might have to settle for a “plan B or plan C” gift this year.

In early November, on the same day that the toy industry unveiled its official predictions for the biggest selling toys and games this year, analysis from i revealed that numerous products were already listed as out of stock, or running low, at some of the nation’s largest retailers. The retailers themselves insisted that some of these products would come back into stock in the coming weeks but could not say when.

The HGV driver shortage has added to their woes, since, even when shipments have arrived, they have in many cases ended up languishing in ports for days instead of being promptly despatched to warehouses and stores.

Logistics experts believe shipping costs will return to normal, but it could take the market a year to right itself.

The HGV driver shortage also had a knock-on effect on fuel availability in the autumn. Thousands of petrol pumps around the country ran dry in September and October as a result of shortages.

There was, retailers claimed, no shortage of fuel in the UK, but the lack of drivers available to transport petrol and diesel to the nation’s forecourts meant hundreds of filling stations went without.

Worried motorists were driven to fill up their tanks “just in case”, exacerbating the problem. Hundreds of Army personnel were deployed to drive petrol tankers, and availability gradually improved, but the driver shortage was far from resolved.

The Government has come up with several strategies intended to alleviate the crisis – some have been better received than others.

In July, Transport Secretary Grant Shapps announced a temporary waiving of safety standards on drivers’ hours, allowing hauliers to clock up more hours on the road than normal. Lorry drivers said they were “vehemently opposed” to this. Bumping up the maximum amount of time they are permitted to be behind the wheel from 56 hours to 60 hours per week would lead to more road traffic accidents, they said.

“We already work very long hours,” one Bury-based driver told i at the time.

“Drivers [will be] driving tired [and] being pushed to do extra deliveries. You’re going to get nasty accidents…This isn’t the solution.”

Other proposals, such as speeding up the training and testing process have gone down better. In September the DfT announced that 50,000 more HGV driving tests would be made available each year by shortening the application process and the tests themselves.

Under the new testing system, drivers will only need to take one, rather than two tests to drive both a rigid and articulated lorry, and car drivers will no longer need to take another test to tow a trailer or caravan.

Skills bootcamps and booked up training

Earlier this month a nationwide series of free “Skills Bootcamps” aimed at getting more HGV drivers on the road began. People who successfully complete the training sessions will be able to gain their licence and be “road ready” in 16 weeks or fewer. There are 11,000 places available on the programme.

However, the road ahead is not clear of obstacles. Indeed, there appears to be another item to add to the list of goods in short supply in the UK: vehicles with which to train the would-be drivers.

On the scheme’s launch day one training firm indicated that the volume of participants outnumbered the quantity of vehicles available for teaching.

“We are fully booked up until April and we are not alone,” said Paul Moon, managing director of 2 Start.

“Up and down the country, [training providers] are fully booked up.”

He added: “It’s a nice position for us to be in but we can’t get hold of enough vehicles.”

Sat Jan 8 , 2022
This story originally featured on Car Bibles. Doing an engine tune-up isn’t as common as it used to be, but it’s not lost in time. While today’s cars are loaded with all kinds of sensors and highly regulated ECUs, you still want to go ahead and perform a tune-up every […] 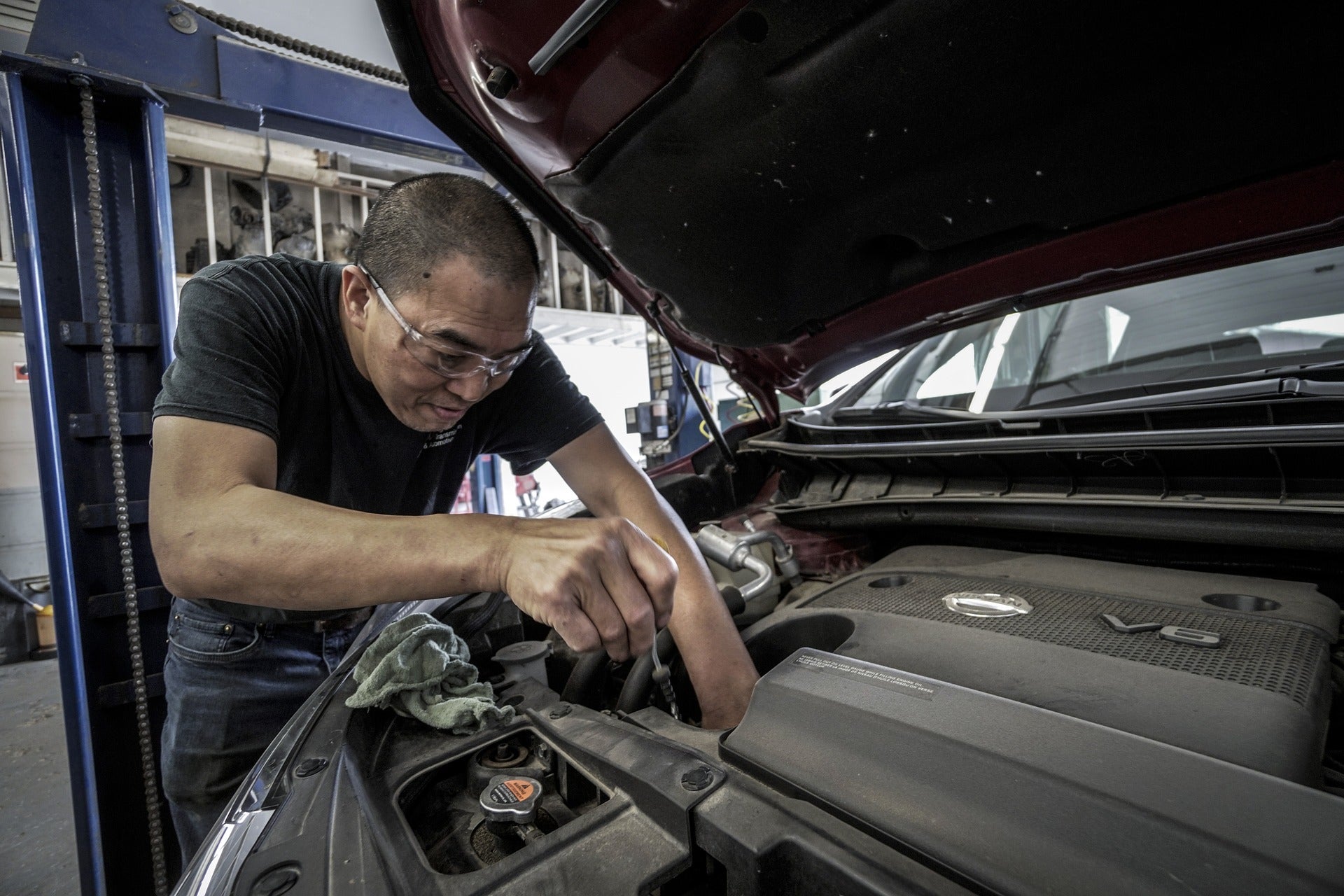