Washington — Democrats in Washington want to include a significant new incentive to buy electric vehicles in their $3.5 trillion social spending bill, according to a new plan revealed Friday by the House Ways and Means Committee.

For five years, the legislation would implement $7,500 point-of-sale consumer rebates for electric vehicles and pay out an additional $4,500 for vehicles assembled in a union facility. Another $500 would be awarded for vehicles using a battery manufactured in the U.S.

For the next five years after that, the $7,500 base credit would only apply to electric vehicles made in the U.S., but the other two incentives would stay the same.

“We want to make sure that people who make good wages, support their families and contribute those wages and benefits in their community are the primary beneficiaries of this,” said Rep. Dan Kildee, D-Flint Township, who serves on the Ways and Means Committee and has been pushing the legislation in the House.

The first five years should incentivize EV adoption and domestic battery production, while the latter half should narrow it down to domestic producers, he said.

“We think that gives everybody ample time to understand that when it comes to the American tax dollar, we’re not going to do this in a way that is so disruptive to the market,” Kildee said.

But “within five years we’re making it clear these dollars are going to people who make good wages in American factories, and that’s where the American tax dollar should go.”

The legislation also seeks to bar the wealthiest Americans and luxury vehicle producers from benefitting from the program by setting caps on income and sale price to qualify.

The income caps are significantly higher than that proposed by Senate Republicans, who voted in a non-binding amendment in August to stop buyers from claiming credits if they make more than $100,000 annually or if the vehicle costs more than $40,000.

The higher income cap will make it possible for 98{92b8314a80b58944ba0df9bff999fd6692ae6ba618bc5950ca8fb5ab90484bed} of taxpayers to use the credit and ensure those who are not the wealthiest Americans are held harmless from the legislation, Kildee said.

“The vast majority of the people who benefit from this will make significantly less than” $400,000, Kildee said. “But we’re trying to remain consistent with the president’s pledge that people making less than $400,000 won’t see a tax increase. Taking this credit away from them, in a sense, would be tantamount to a tax increase.”

GOP members are not expected to vote for the $3.5 trillion social spending plan that Democrats plan to pass along party lines using a “reconciliation” budget process, which allows them to overcome the 60-vote threshold needed to pass most legislation in the Senate.

The House Ways and Means Committee will vote on whether to include the consumer credit legislation in the reconciliation bill next week.

Democrats will need to remain in lockstep to pass the legislation without the help of any Republicans. They have a 220-212 majority in the House and a razor-thin 50-50 majority in the Senate, with Vice President Kamala Harris casting the tie-breaking vote.

House Democrats have been working with leaders in the Senate and the White House to agree on an incentive structure that “we can get across the finish line,” Kildee said. “I think it will be included no matter what the scale of the broader legislation might be.”

President Joe Biden has called for $174 billion for U.S. manufacturers to “win” the electric vehicle market, which is expected to grow rapidly in coming years. His original proposal included $100 billion in consumer incentives and $15 billion to build a nationwide network of EV charging stations.

The tax credit legislation released Friday also differs from a version proposed by Sen. Debbie Stabenow, D-Lansing, which passed a Senate panel in May. At that time, the provision was estimated to cost $30 billion over the course of 10 years.

Stabenow’s original version would have eliminated the cap for automakers, added $2,500 for autos built by union members and an additional $2,500 for vehicles assembled in the U.S.

Stabenow, who has been spearheading the effort in the Senate, said she’s pleased with the “robust” consumer rebate that she, Kildee and others have negotiated over the last several months.

“The automakers were on speed dial and the UAW. We have an approach that is not only good for encouraging people to choose an electric vehicle, but we have very specific Michigan incentives and bonuses on top of that,” she said.

Stabenow called the $4,500 credit for union-made vehicles a “Michigan bonus” that rewards auto companies “that are providing high labor standards and wages.”

Only vehicles powered by high-capacity batteries would qualify for the full $7,500 base credit to incentivize automakers to build EVs that can travel further on a single charge. “Range anxiety” — the concern that drivers won’t be able to complete long driving trips in their EV — is one of the main consumer barriers to EV adoption, according to industry analysts.

Currently, electric vehicle buyers can qualify for a $7,500 tax credit only for manufacturers that have sold fewer than 200,000 total EVs. That’s pushed General Motors Co. and Tesla Inc. out of the running for the incentive. There’s also no maximum vehicle price or income cap.

The Ways and Means provision would lift the 200,000 vehicle cap, according to Kildee’s office.

The Alliance for Automotive Innovation, an advocacy organization representing major automakers that sell vehicles in the U.S., has also said it supports expanding consumer incentives to buy EVs.

Fri Sep 17 , 2021
A person takes part in a Fridays for Future protest outside the Austrian Economic Chamber, in Vienna, Austria, May 14, 2021. REUTERS/Lisi Niesner/File Photo Sept 13 (Reuters) – Engine No. 1, which won an against-the-odds board challenge against Exxon Mobil Corp (XOM.N) earlier this year, is publishing a framework for […] 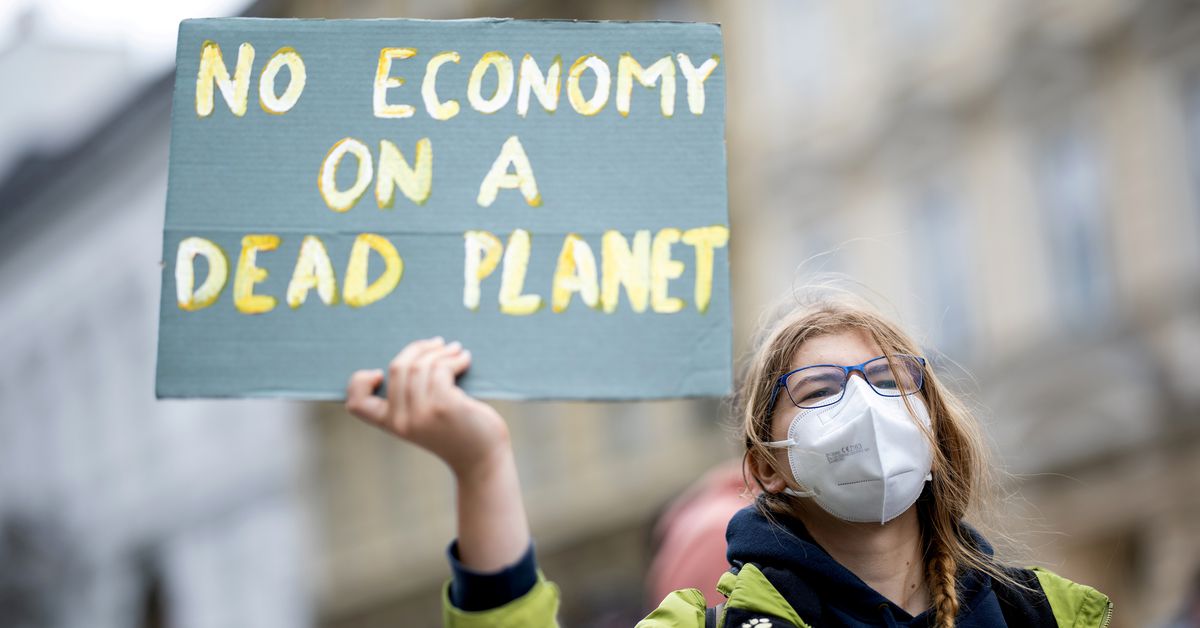